Day of the glasswork industry

November 19 – day when the Russia celebrates Day of the glasswork industry.

Workers holiday glass industry is no accident coincides with the birthday of a prominent Russian scientist MV Lomonosov. 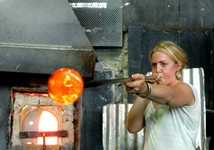 Glass, without which it is currently almost impossible to do in any area of human life and activity, received over five thousand years ago. The earliest examples of glass products, which have reached us – of Egyptian origin.

In Russia the production of artistic glass products (tiles, kitchenware, bracelets), existed from the beginning of XI century. Manufacturing technology of glass has been picked up by the Byzantines, and already in the times of Yaroslav the Wise of Kiev masters began to manufacture lead-silica glass. Despite its ancient history, massive production of glass acquired only in the late 19 th century with the invention of the furnace of Siemens-Martin and factory production of soda.

And as for flat glass – a thing altogether modern. The technology of its manufacture was developed in the second half of the 20 century.